An Englishman's Home is His River

Thanks to some determined bidding, Mr Chips and I won ourselves a weekend on the Eden with North Country Angler. To be entirely honest, I wasn't considering the fishing. I had to meet the fellow who writes the best blog on fly fishing. NCA writes with such grace and sincerity i can't help but be drawn in in every post.
We all met by a red stone bridge and Mr Chips and I followed NCA faithfully to the Eden. As I stood looking at the green trees, sheathing the black scar of the river, oddly in this English paradigm I thought of America. More specifically Norman Maclean;s description of his beloved Blackfoot in Montana.


The River is straight rapids until it strikes through big rocks or big trees with
big roots. Then it swirls and deepens away behind big rocks and
circles back through them where big fish lie under the foam.
Fishing on the Eden is exciting stuff. It certainly got my heart racing when I managed to hook into a large fish and play it fretfully for what felt like forever as it ran amongst the stones. The clever beast unhooked itself at the very moment NCA reached to it with his net. Mr Chips was far wilier and managed to land a beauty which left him grinning like a schoolboy. The river Eden is just, so..manly. The boulders are brutal, it scars itself through cliffs the colour of burnt flesh and when it rains it rises quickly. Yes, very like a Montana river called something butch like Wolf Creek. However, it wasn't so much the geological similarities that made me think of a River Runs Through It. Nor, though Mr Chips and NCA are both gorgeous, was it that my companions resembled a dripping wet Brad Pitt. It was the overwhelming sense of home that oozed out of  my friends as nattered about their local rivers. I was remeinded of the Maclean boys skipping through their "Home River". 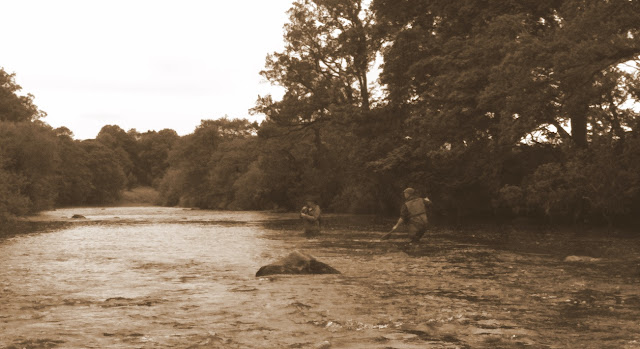 NCA knows every fish in every hole and every creepy crawlie on his river. I felt very humbled to be shepherded through it by someone with such patience and dignity. Thanks to NCA's "fish whispering" I caught a large grayling at the close of play.
I felt nothing short of envy as they compared and contrasted their rivers. That deep knowledge grown from love is something I want deeply.
I am a peripatetic fisherlasss, more so than ever this year. Thus far, this season, I have fished no less than Seven different rivers. If they were lovers, you could quite rightly call me a slut. I need to settle down.
I returned on Monday to my northern chalk stream and it greeted me like a stern father. It gave me one fish but didn't let me hook into the eight further rises I missed. Clearly he didn't want to spoil me. So I am returning on Sunday and  settling down a bit, at least for this week.