On Acheivement.
I finished my Salmon fly a couple of weeks ago and well, it’s a scruffy old thing but honestly It’s probably one of things I am most proud of. 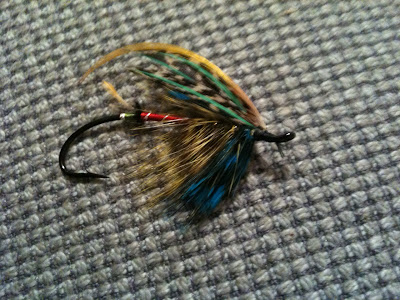 Classic salmon tying is probably about as dramatic as you can get hunched by a vice under the burn of an overhead lamp.  I spent over an hour manipulating little shreds of feather making them marry into an acceptable stripey form.  It’s an odd thing, when you think about it forcing peacock and turkey bits together to make an attractive marriage. I felt like I was fighting nature as I was doing it. Then oddly began thinking of genetics and eugenics and arranged marriages in Afghanistan and all whilst trying to make a stripey wing.  I clearly listen to far too much Radio 4.
Anyway, the next stage in the process is to add a weight to your thread so it will pull your feathers down.  You can’t see any of this, the feathers are obsured by your fingers which are gripping them  for dear life. Two wraps and you drop the weight.  Then you sigh and wait.  Summoning up the courage to move your hand to reveal perfection. Or a mess.   My fly is a bit slovenly housewife rather than yummy mummy.
Fishing is all about these agonising little moments.  You cast upstream, watch your fly drift, glance at a fish flick it’s fins, will it look? Will it bolt? Or will it gobble. If it gobbles then the agony really begins. Your rod connects and it’s girl versus fish. You feel it shaking its head, sensing every moment of struggle. You look at the rod bending as you feel your tippet strain.  You guide it out of weeds, you ease it upwards as it bores downwards.  It’s weakening, then a paniced fumble in your pocket for your forceps, or your lanyard is caught in your glasses, then your glasses fall off. Your creel catches in your hair. You screech as the only way out of this mess was to sacrifice a chunk of hair.  Then the net then won’t come out of your belt loop. It’s freed with a jerk then the wretched thing gets caught in nettles. You rescue the net, burning your hands in the nettles. The fish flaps as you flail. The heart pounds and the brow wrinkles. Then you calm down, to calm the fish down to ease out the hook.  To coo and caress it back to freedom.  You sort your line out, dry your fly then do it all over again.
Looking at it this way, fly fishing is a bit of a nightmare. Fly tying more so. Why do we inflict crisis after crisis on ourselves? Or maybe it’s just me that experiences total turbulence each time I catch a fish.  Do I do it because of survivor’s euphoria? Or is it because each fish caught, each fly tied is a little victory? A small acheivement that makes sense of and brings a fleeting sense of order to a chaotic world.


Other little victories: The kind folk at Fishtec mentioned me as something worth reading. http://www.fishtec.co.uk/blog/more-fishing-blogs-to-be-reckoned-with/

I tied an Ollie Edwards cut wing dun. Shed loads more flies to tie. I am up against it. 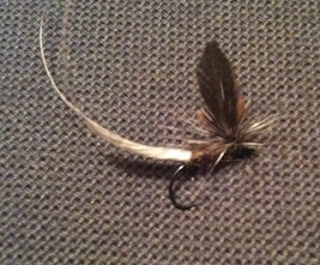 I’ve been a very good girl this week. I’ve kept being decarbohydrated  and I’ve managed to tie one more Oliver Edwards. It’s a Klinkhammer Extreme. My version looks rather dull and run of the mill but thinking about it, how extreme can a fly be? It’s hardly going to stage a fascist rally or dissolve into anarchy. Perhaps if my wing post were bright pink like Oliver Edward’s it would help.  Still, it’s about as radical as a Surrey teenager piercing their navel. 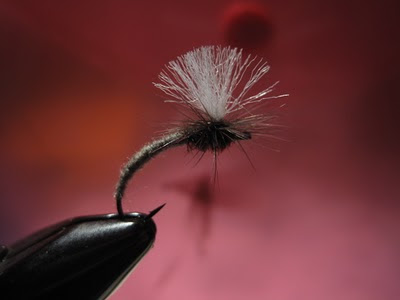 Fly Dressers Guild was brilliant this week.  Fourteen of us have made a start on tying a classic style married wing salmon fly. If you don’t know what one is I recommend you look at anything tied by Paul Little. Apparently he takes nearly a day to tie a fly. I believe it. It took me two hours to do the body. I am quite pleased with my rear end, though the front is rather less convincing.Tying these flies demand perfection and exacting standards.  To avoid fraying the silk floss, hulking men from Yorkshire will wear small and slinky silk gloves when they tie these flies.  How extremely ridiculous.
I went fishing this Saturday at the small Stillwater Kilnsey Park.  The temperature stayed at nought or there abouts. The day was peppered by blizzards and a howling gale was ever present.  My hat blew off, my line blew everywhere, my rod blew away.  It was quite inclement and I was only kept warm/alive when I was lent a very swanky jacket with particularly good, deep pockets.  It was a Grey’s GRXI XTREME.
I also learnt a thing or two about fishing still waters which, as a child of the chalk I can be quite snobby about.  The men I fished with were highly dedicated and focussed. It takes a certain amount of bloody mindedness to fish solely for size or number.  On that kind of water, pleasurable angling becomes sport fishing.  For me the difference between the insouciant, languid river fishing I like to do and the extreme sport of still water angling is like the difference between eating a large, rich, indulgent meal, and participating in a food contest.
at Thursday, January 13, 2011

A very happy New Year to you all.  I apologise for being very quiet on the blog front over the last month. I do so appreciate your concern and your complaints. It’s very encouraging to know that someone other than my mother reads this.  I am now recovered from flu, back in the North and back to work.
I have been rather an idiot and left my Oliver Edwards behind in London. I’ll pick up the week after next and then I’ll have to hop to it as I am running out of weeks to tie all of those dastardly flies of his. However, having just seen a demonstration of tying a married salmon fly by Jim Brown at my Local Fly Dressers Guild, I have no reason to complain. I foolishly signed up to have a go at one for next week. I’ll let you know how it goes.
The diet is going rather better than the fly tying. The first couple of days are going well. However, when people ask me how I am my answer is just “hungry” as all other emotions have been swallowed up in the (relatively) empty void that is my stomach. I’m being very harsh on myself as I figure that there really isn’t any difference between feeling hungry and very hungry. I need results. I’m going to a wedding where I shall be surrounded by hard working, hard bodied London women, who don’t have time to do anything at all, let alone eat.  I am having horrors over the photos. In my current state it will look like I have consumed one or two of my oldest friends.
The worrying thing about all of this is that I have never been thin.  I was born Buddha-bellied and could be described as a stocky child. I have moved up north and discovered butter. I lived with a man for far too long who could consume his own body weight in stew.    I have always been chubby and I am now chubbier, if not, chubbiest.  I need to get rid of a good five inches worth of myself for the wedding which, if it works, will mean that I am not skinny, not even thin, but not chubby anymore.  I am changing me. 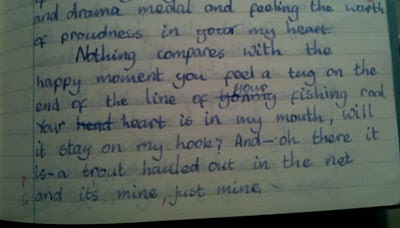 There are some things about myself I shall never change.  I was really heartened reading an old exercise book of mine.  I wrote, aged nine:
“Nothing compares with the happy moment [when] you feel the tug on the end of line of your fishing rid. Your heart is in my mouth. Will it stay on my hook? And oh-there it is- a trout landed in the net and it’s mine just mine”
I think we had been asked to write about our favourite feelings. I hadn’t written a title or a date. I was marked down accordingly by Sister Madeleine.
I now have written evidence that fishing, that constant search for fishy tugs has been very much part of who I am for nearly twenty years. At a time when many of us are giving up something, taking up something and jumping on the New Year’s bandwagon of some form of self-improvement it’s comforting to know that being an angler is something that doesn’t have to be changed. I will make one resolution though for this year, to fish well and fish often.
at Wednesday, January 05, 2011