I think my little world is changing and going fishing this Sunday has made it clear. Things are moving on nicely with the Physicist. I took him home for Christmas and we are still together so I view this as successful. The family seem to like him; my aunt would even like his babies, apparently.

I found myself this weekend in the odd position of having an "'im indoors". It's like an 'er indoors but with testicles. I have been tidied up after, shopped for and have been very well cared for all week whilst at work. Somehow, I racked up enough "brownie points" (men always seemed to need these) and I was allowed out for the day leaving the Physicist waiting patiently at home.
I was off out winter grayling fishing. Now this is something I don't do. Civilised people don't wade in rivers oop North in January. However, you don't turn down an offer from the Master.
So, the ever patient Physicist was lured to Marks and Spencer to go shopping for negligee. Thermal leggings, socks, vest and a gilet were purchased.
I met the Master in a market town in North Yorkshire on the auspices of joining in a competition. I was stiff from lack of sleep and five layers of clothing. We were given our beat and off we went. I was told very firmly (again, you don't disagree with the Master) that my fly rod was spare and today we were using a centre pin.
Now, us fly fisherfolk can be terrible snobs. I count myself as one of the best and have been very dismissive of coarse fishing in the past. To me, coarse fishing was all maggots, boilies, bait alarms and cratefuls of gear. I take it back. There is something very lovely about drawing line down a rod and off the reel with two fingers. I loved the lob type casts; the heft of the float and shot plopping into position was a bit like a baby seal flopping towards its mother. Difficult and inelegant but satisfying. Floating a worm downstream on the free running line of the centrpin was like tapping into the blood flow of the river.With constant, gentle adjustments, it was like feeling the pulse of the river using my thumb on the circle-shaped reel. The reel turns gently paying out line as the float drifts. I could have watched that float drift for ever.


I shall add that I caught nothing on my own, I lacked skill knowledge and experience. True to form, the master held the rod twice and caught two off season trout. Beautiful, firm and wild.
To return to my first sentence, things have changed. I'm being cared for and have someone to abandon whilst I fish (a situation I do not like at all and hope to change). I think also, that this child of the chalk might well dabble a bit further into the world of coarse fishing. I shall keep my blog title, though A Coarse lady's life sounds far more interestsing.
at Wednesday, January 11, 2012

Fisherfolk must know a thing or two. We spend all day near or on the water not doing much which gives us time to think, possibly too much time. This should explain why there are so many experts in fishing, so many people offering advice and the benefits of their wisdom. The cosy inertia of the river bank affording the space needed to provide reasons, or excuses for one's success or failure. The long, cold winter giving the time to write it all up as blogs or articles in Trout and Salmon. I hope that sometimes all that thinking time can spawn something useful. 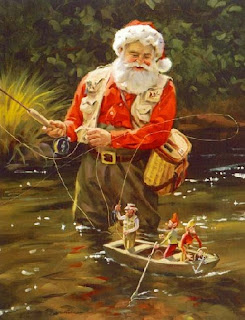 I hate fly fishing art on the whole, it's impossibly naff at times but most commendably, often worthy of a place in the Daily Mail's "Not the Turner Prize". There is possibly no genre more worrying than hyper realism. All that copying is just a little unhealthy. Fishing art is more often than not just naff and twee.
Today I came across this cracking painting which has changed my mind about fishing art. 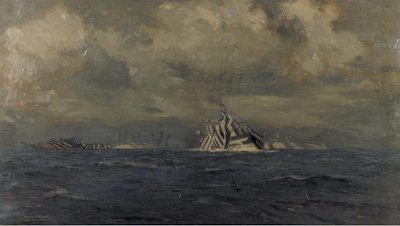 Dazzled Ships at Night, (1918) Norman Wilkinson Image copyright of the Imperial War Museum
After the Wars, he turned his attention to providing awesomely groovy images for government posters. 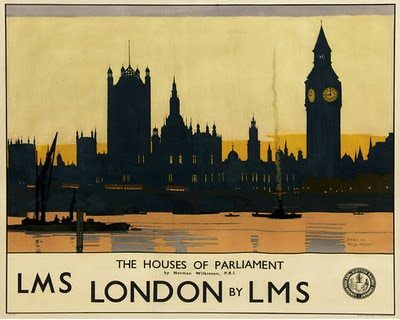 I like to imagine that he came up with the idea of dazzle during an evening with trout bursting to the surface as the sunlight casts strong shapes over a river's ripples. The overall effect causing him blinking confusion as to where to place his fly; or at least that was his excusing for missing the rise.
at Thursday, January 05, 2012