I’ve been having an affair with a woman, well a female. I’ve been sneaking out furtively when I can. Packing up special outfits and equipment and leaving work quickly. I’ve taken to texting the Physicist with excuses as well. “I’ll talk later”. “I’m out, not sure when I’ll be back”. “Don’t call me, I’ll call you”. Before we panic, I’m talking about the Pretty Ditch, my club water.

She hasn’t been kind to me. I’m just not used to her. I’m trying to get to know her, what she likes and what she needs. She’s just fickle and ever changing.
Her high sided banks are either overcrowded with trees or thick with nettles and flowers. I find myself grabbing on to over-hanging branches; straddling them as I try to scramble up muddy banks to avoid a dark, deep hole. She runs slowly, then, turn a corner and she is riffling quickly over rocks. Her bed is sometimes silty and sometimes gravelsome. On rare occasions it is lush and covered with weed. Her fluctuating nature, is my excuse, my reason for having so far managed to catch only a grayling and roach all season. 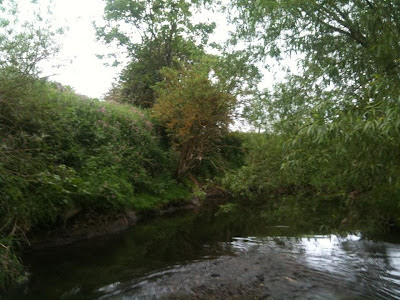 I wish I could say that I was more successful and more pleasing to trout on other rivers. I blanked on the Eden and blanked on Driffield Beck. Admittedly one day it was scorching hot, the other day is was bucketing down with rain and blowing a gale. At Driffield, I fared better and was rather proud to have risen about six fish in difficult conditions. I also lost one good trout when I tied a knot badly. It was the end of the day and my fingers were bloody cold. I seemed to have suffered from a sort of fly fishing premature ejaculation. I was nervous and striking too quickly; beginnings without ends and excitement without orgasm. I'm worried I’ve lost my fishing mojo. Luckily this poor performance didn't put off my man of dishonour (male maid of honour) who joined me fishing for the first time. Bizarrely, he was riveted by the experience and vows to join me again but wearing a waterproof and wellies. I am afraid he spent the trip damp and hungry. Seemingly, unlike females, men are easy to please. 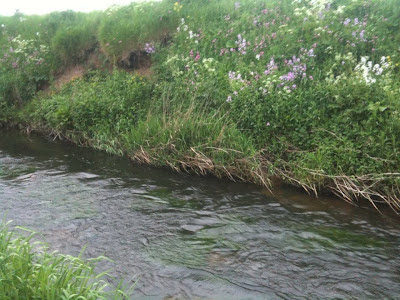