As I write, according to some rather mad preacher I should be in Heaven or Hell or being sorted accordingly. The world ought to have ended. The fact that I still have laundry to do suggests otherwise.  If it has, I think I would be ready to meet my maker as I have had my glimpse of Paradise.
Imagine waiting by your car, you are joined by another disciple and the Master comes to meet you. You walk through fields of heady, psychedelic rape, your eyes stinging mildly with hay fever and the drone of cars buzzing in your ears. He leads you down a steep bank, so steep you have do slide down on your bottom. You fear slightly for your new waders. You plop into the river inelegantly; you look ahead to the Master pointing his stick. The river is still and sluggish, you look behind. Your bum has squished its way down a deep, steep bank of garish pink flowers. You look above and realise the river is canopied with stretches of branches and rich green leaves. The traffic noises gone, you are now in the world of the Secret River.
The Master tells you to cast. You stare back at him in disbelief. Indignantly and almost rudely, you exclaim, “How?” Then he shows you, it’s now totally clear why he is the Master and you are a mere disciple. Somehow, he has managed to cast so low above the water and under those cruelly dangling branches. The disciples gasp.
You spend a day, watching, listening, learning, fishing.  Suddenly you find yourself fishing a mysterious new method called the “Duo”. The Master coaches your ill-disciplined wrist until you learn how to do a side cast by your knees. You learn how to press yourself into the opposite bank to allow yourself an extra foot of room.  He and the other disciple goad your slow reflexes. Then suddenly, you find yourself catching fish. At one, glorious point something that only happens in the fairy tales of fisher folk occurs. At the precise moment that you hook into a fish an electric blue kingfisher stops his zooming and rests on a branch to watch you play your fish. This sounds silly but it was as if he doffed his cap out of recognition of a fellow fisherman. You see, this is the kind of gentle magic that happens on the Secret River. As the afternoon plays itself out the Mayflies drift down, almost as if someone is shaking a packet of cornflakes from the sky.  Learning becomes fun.  Then you are no longer one of two disciples guided by the Master but three people, laughing, playing at catching the wildest of wild fish in the Secret River. The giggles continue between the three of you, strangers only hours before, now swopping rods, changing methods gaining as much pleasure from watching as catching.  Then, just as you start to feel comfortable with being immersed in the world of the Secret River, the temperature drops and it’s time to go. The three of you ascend the banks and trudge back through the rape and nettles. The laughter stops as reality comes smacking back at the first glimpse of tarmac and the first sound of tyres and engines. The trio splits up.  You drive home and become aware that your hands are scratched to shit and stinging from nettles, another pinch to wake you up from this dream of a day’s fishing.
at Saturday, May 21, 2011

A few weeks ago my father and I shared a rod together. We went in search of something Mr Chips and I have called the “River Effect”. You know, that gentle easing of care and woe achieved my flinging a line across flowing water.
We had buried my grandmother only two days before. My fondest memories of her will naturally be of those days when she joined us by the river. 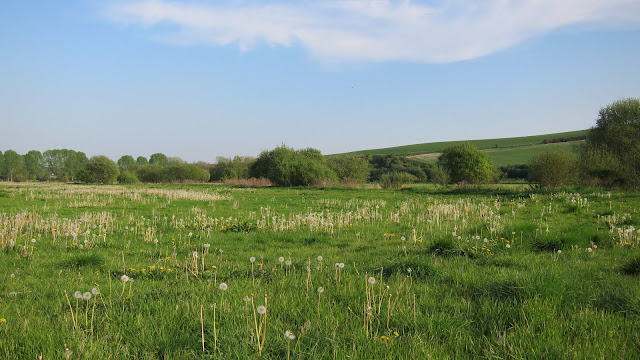 .
She would drive probably frighteningly slowly, frighteningly quickly and in a reassuring erratic manner laden with lobster, crab frsh baguettes and lashings and lashings of homemade mayonnaise.
After making ourselves ill on a surfeit of shellfish we would resume fishing.  She would then grab her National Trust fold away chair and watch each of us, my mother, my father and I fish in turn.
She was the worst backseat fisherman in the world; always offering help and advice and assistance. She never held a fly rod in her life. However, resplendent in pure white linen and on her green canvas throne, she took control of the river. 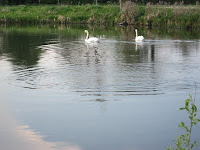 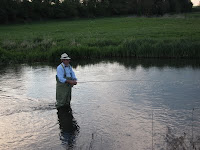 She came so often I think because she truly understood, the frustration, the joy and ultimately peace and beauty that only fly fishing on a clear river can bring.
I was very touched when, as we stayed in her now empty, hollow-feeling house, I found a file marked "Polly". Inside were print outs of my blog entries. I shall miss her (and her mayonnaise) hugely.
My father’s club waters on the river Wyle are special, beautifully restored, lovingly cared for they are an image of chalk stream perfection. 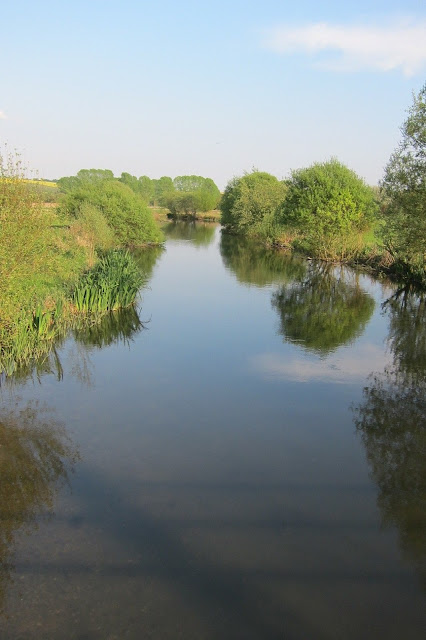 From the start my father gloatingly referred to himself as the Grand Master. Despite the fact that he has the worst casting technique, floppy wrists, rod too far back etc.. he managed to pull out trout after trout. I rolled my eyes and giggled with him for a whole day. I left the river sunburnt, looking like I had been smacked in the face by one of Granny’s lobsters and I felt heavy with tiredness and at ease. The River effect indeed.
at Sunday, May 08, 2011