I’ll always remember the summers of 2010 and 2011 as stagioni mirabili. They were pretty much carefree. I went fishing once or twice a week. If I wasn't fishing, I was in my garden, growing things. Polly Putnam: The Rock n Roll Years.

I  had an attic room, with a fly tying desk.  It was my little sanctuary. My house-mate was a vegan, animal-rights activist, gay man from the Basque country. We got on very well. Well, we did until I mentioned mink and how they are horrid, foreign, vermin that deserve slow, painful deaths.  Things changed a little after that. Differences aside, he was a top chap and a good house-mate.
Climbing up the narrow, rickety stairs was an adventure and an escape to fly fishing heaven without the river. Chopping up bits of deer hair and scraping the face of a dead hare was my small rebellion against mink lovers.  I loved that space, cluttered with scissors and bottles of varnish. Vases filled with feathers and tins of hooks fought for space amongst empty mugs of forgotten tea.  There was also a little sofa which was strewn with fishing books and magazines. I even had a good set of speakers and thanks to the wonder that is BBC IPlayer I had The Archers on tap.
A year or so on, I’ve left York and moved to London.  The terraced house near the river, the attic, the garden and the vast array of weird and wonderful housemates are gone. I’m in a flat in Cricklewood, such is the north south divide.
My fly tying desk remains, though now it’s shoved unsatisfactorily against a wall in the bedroom. My pliers and vice are gathering dust. Work, weddings and weather prevent me from fishing.  A physicist now has pride of place in every room. Statue still, he stares at a screen covered in code surrounding himself with columns of symbols and numbers.  He is more mysterious than a strange quark. He is also charming and beautiful.*
A lot of what he owns is encased in clear plastic bags. Dollars, Euros, Sterling and Swiss Francs bang against each other and the endless bottles of painkillers and cables. It’s like a G8 summit in a fairground goldfish bag.  Big, blue bottles of man shampoo are making friends with Caroline Worthington and John Frieda.  My dresses and his shirts hang side by side.  I like to think they hold hands when I close the wardrobe door.  My shoes, which take over the bottom of the wardrobe breed like mice in the darkness. It's all a sign that I’m getting married. I’ll fish less, I’ll tie less flies. I’ll inevitably have to call rentokill and cull some shoes and boots. It’s okay though, more than okay. Besides, I still have a shelf for my waders, rod and reel. 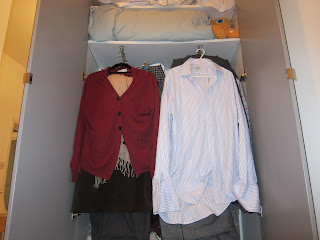 *This is a bad physics joke referring to types of quark