I've wanted a home river for ages now. I've been a peripatetic day ticket fisherman all my life. I am now a member of an angling club and have all the access I need to the Pretty Ditch, when it isn't filled to the brim.
Today I had lunch with close friends like I have done many times over the years.  A little baby has recently joined our elite set of thinkers and jokers. Her gurgling and screaming made me feel like I was in the midst of my Yorkshire family. I waddled, gammon and chocolate-filled to my little rented terrace along the river, the Ouse in York. Its burst banks had recently subsided leaving a muddy film smeared all over its walkways. 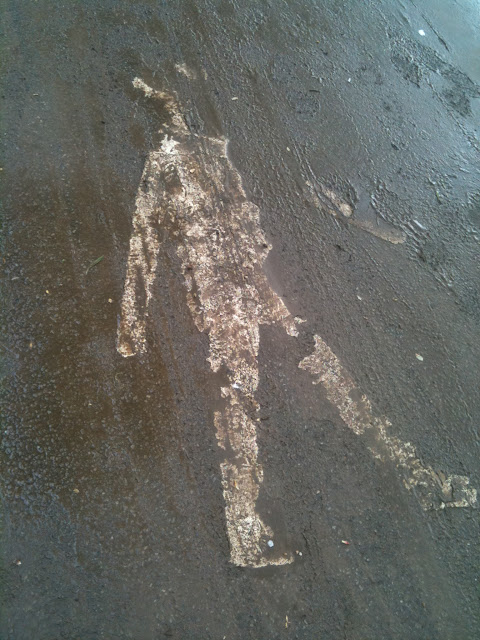 For much of the year it is a benign and pleasant distraction on my walk into town. Its banks are crowded by tourists, cyclists, smug runners and dishevelled intoxicated students.  The concrete, brick and gravel taming it into a wide water feature.
Today I was reminded of its wildness. I nearly trod on the chewed remains of a pike. A few steps further and I saw the final resting place of a large bream. 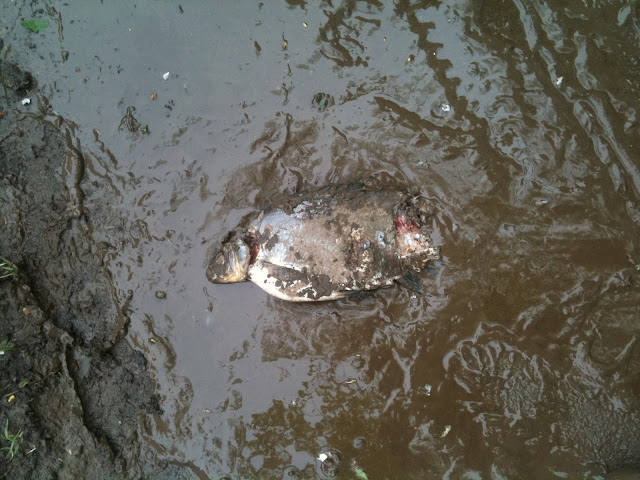 The strange, rapid rise and fall were too quick for these poor creatures.  Further on and a large branch has alighted itself on the park bench, an odd juxtaposition worthy of Andy Goldsworthy.The viewing dock is wrapped in yet more branches and a television. 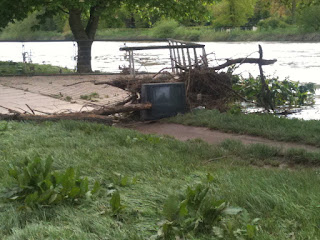 I’ve never fished the Ouse. It’s not really occurred to me to. I have to admit that I am a little put off by the lonely men yanking out roach as they smoke roll-ups and the likely lads spinning violently for pike.  Because I have never fished it I had ruled it out as my home river.
The debris, the dead fish and the slippery mud knocked sense into me. A hundred yards from my house and some steps take me to its banks.  This river is home.  I’ve walked up and down it countless times. When I walk it now I always think of the endlessly repetitive conversations I've shared with ex-house-mate, colleague and man of honour, about Masterchef, London and Breakfast at Tiffany’s. There is also a certain spot, where, after a jolly afternoon sinking impromptu cocktails he found relief. I still giggle each time I pass it.
The street lights and the sight of a modern, multi-coloured bridge have guided me home at times when it really would be more appropriate to take a cab. I am drawn to the Ouse. It offers a safe haven away from the night time, horrendous customers of kebab shops and the Wetherspoons following a day at York Racecourse.  One evening I saw a huge pike loll and roll on its flanks under a bush on the opposite bank. I like to imagine it had just swallowed a coot.
I’ll always remember watching the minnows jump and shimmy away from another large pike under the orange glare by Brownie Dyke Lane. In this instance it wasn’t because I’m an angler and I like these things. It’s because I was with my Physicist on a balmy July evening. He talked about the Manhattan Project and I realised then that he would never bore me. So I kissed him. 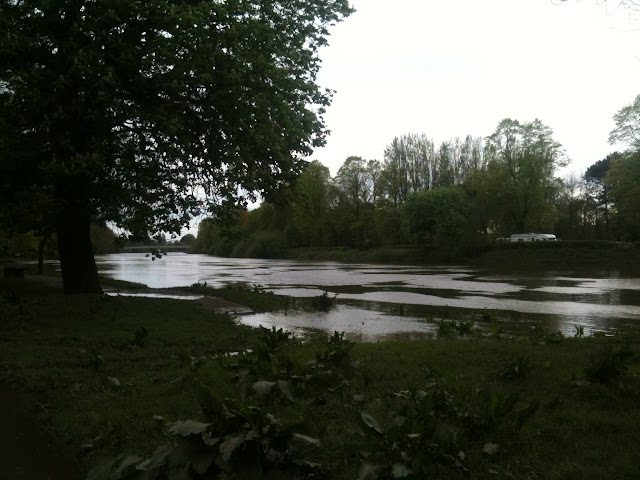 * I bought Caught by the River: A Collection of Words on Water three years ago and became immersed in its tales of other people's rivers. Pretty soon afterwards I decided to start this blog in the dream of perhaps, when pigs have flown be able to write like those guys. I write this post today in homage to that book and accompanying website.

It was time to go.  I've been cooped up inside far too long. I’ve been living on my own for the last month. I've enjoyed the space and the knowledge that any hair I find in the bathroom is mine and mine alone. However, time and space can lead to a cluttered mind.  I needed a room without walls with water flowing right through it. Time to head outside.

So last night I packed up, sorted through reams of rotted reels of line and scrambled together a fly assortment of sorts. I bought Scotch-eggs and filled the thermoses. Yes, for the first time this year I was going fishing.

I’d been dying to try out the Pretty Ditch all season, work and rain and Swiss-based-husbands-to-be have prevented me so far.  The Pretty Ditch is my club water and I’ve been looking forward to working with her all year.  She was looking rather scruffy, like a deranged woman returned from drinking.  She had clearly almost flooded and the flow through her reminded me of the might River Eden.    After an hour trudging through her and up her, I learned so much.  Today she was cloudy but she is always high-sided and crowded with trees.  You can’t cast far, so controlling the drag on a sole nymph through a raging stream was difficult. I added a dropper and put a klink on, hopefully helping me see. This is a nod to allowing the dry fly fish more naturally. I am unused to duos, I am unused to casting with trees and bank everywhere and so very soon I got very used to ghastly tangles. 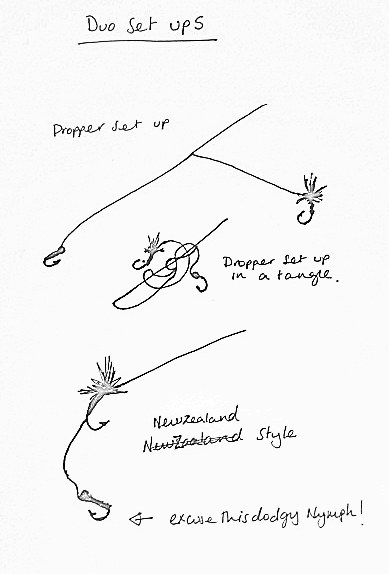 I switched to using a progressive New Zealand style.  Here you tie the dry and then attach the nymph to the bend of a hook.  Using this method, your dry fly really is little more than an indicator.
I needed it today, I couldn’t read the pull of my line fast enough in the water and this way the fly and nymph tangle up a lot, lot less.   If I had more space I would prefer to use a dropper but it was helping me get used to the weight of two flies.

Catching my first fish of the season was glorious. I paused when I spotted some flitting olives knowing that a rise couldn’t be far away. I snipped off the foreign klink and dink set up and put on a dry.  Two dodgy casts and one perfect one gave me a small and gorgeous grayling.

I ploughed on upstream and the Pretty Ditch gave me a big surprise in the form of a big drop into a deep hole. I nearly lost me and I certainly lost my net which ended my delayed season’s first trip prematurely. 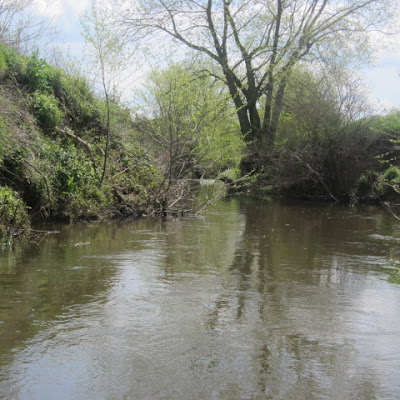 Today was a start, not the one I hoped for but there’s plenty of time to make up for it. Next weekend I return to my Pretty Ditch.