Wikipedia defines perfection as,“a state of completeness and flawlessness”. I think this has something to do with Pi and circles and maths.

When most of us think of perfection, I think we think of perfectionists. You know, the fastidious types whose desks are tidy and whose pencils are sharp and who run their lives by Excel spreadsheet. I am rarely like that. I have my moments though. I am hypercritical of bad grammar in others; I know my blog is littered with mistakes but grammar matters. I wish I could apply such a critical eye over my own writings. I also am really fussy about saucepans and plates in cupboards. Everything has its proper place. I am fussy about hanging pictures, the fonts on labels and tea pots in display cases. It’s my job to be this way. I am a curator, being fussy about detail is what we are good at. I bring my work home sometimes; once I made my housemate re-hang all of his pictures in his bedroom. This is the pursuit of flawlessness. However, a correct sentence, a straight picture and a beautifully placed teapot, though flawless in execution, lack a certain completeness on their own.

To explain further, imagine this scenario. It's a true story. Place yourself on a warm, cloudy day on the banks of a southern chalkstream. Gin clear water filled with feeding fish. Gin clear water containing the biggest trout you have seen for years. It’s at least 6lbs, it’s probably 8lbs. It shouldn’t be in that castable spot. You look ahead and realise its proper home is tucked into the near bank, under a bush, impossible to get to. It’s on a holiday, the one day a year where she will expose herself to some sun. Fat Mrs Haversham leaves the attic. You walk past, you come back and watch her. She’s eating nymphs very near the surface but not quite on it. You tie on your scruffy version of a Wyatts DHE. When you grease it, you feel a bit like Arnold Schwarzenegger in “Predator”, psyching yourself up preparing your weapons for the big guy. It’s tense.You begin. One gentle cast behind it to get your judgement right. You go for the money cast. They never work first time. Well, not for me. For once, it works. The fly falls gloriously, floppily and with deadly accuracy. You watch the fly, you watch her. Her mouth opens, it’s about the size of a saucer. Her mouth opens for me, for my fly. You flinch in surprise, the fly moves. You hear a “sploosh” like someone dropping a champagne bottle in a bathtub, confirming its size like a slap in the face. She’s gone back down, without your fly. So, flawlessness without completeness.

Whilst I participated in this indulgence, my mother was teaching my Physicist how to cast. He is brilliant. Somehow, he seemed instinctively to get the "pause". The "pause" which all fly fisherman know, is an essential part of casting. The "pause" following a back cast, is the difference between a staright line and a nasty tangle. He talked physics at me, explaining the theory of casting, he used the word "synchronicity" which I liked, whilst executing a series of pretty decent casts. I have never felt more proud. He’s a long way off flawless, but the fact he caught a fish, played many and has mastered the theory of casting makes me feel like I am on the path to completeness. 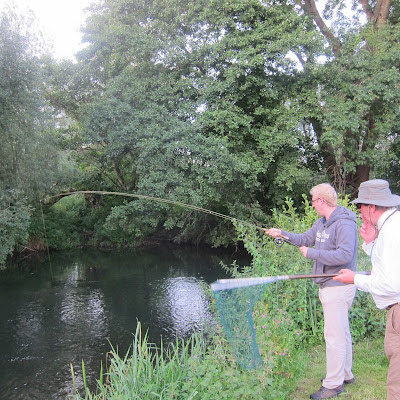