My mother said I should never write in books.  Sorry Ma, but I’ve always ignored you on that one. School set-texts were vigorously highlighted and annotated, I even colour coded my scribbles. My museum training tells me that these books are now forever ruined and conservators make me fear biro being both indelible and acidic. My school copy of Pride and Prejudice will probably fizzle and crumble away but for now my teenage scribbles of “ooh er Mr Darcy”,“Go Lizzy!” and “yawn, yawn, yawn” make me smile and have recorded my first impressions of reading that great novel. Incidentally, I don’t actually like the book that much but I did enjoy the BBC seres, you know, the one where Colin Firth jumps in a lake.

I found genuine joy as a student reading the well-thumbed Bodleian copies of the standard texts. In true Oxford pretentious fashion, there would be long commentaries by individual students, arguing in the margins, academic, arrogant posturing.  Other scribbles were more helpful. I am forever thankful to the student who wrote ‘this is bollocks, read Brian Davies instead’. It saved me a lot of time on the run up to a tight deadline. Indeed, I think I remember adding an illicit “thanks” in the margin.  Best of all though, is when you see a scribble in a book that was given as a present and memories of that person and that past flood back. 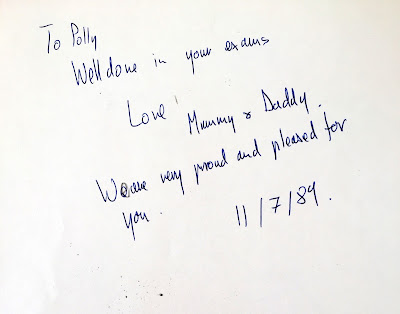 There’s a long history of margin scribbling. One of my favourite museum objects ever is Liebniz’s copy of Newton’s Principia Mathematica, in the Bodmer museum in Geneva. It’s annotated all over; the hatchings and blots are the reasons behind their longstanding and famous battle for scientific supremacy in the eyes of the establishment. In my own studies, the daily menus of King George I list pies, eels, and boiled beef in the main, but the margins have hasty additions of things like liverwurst and pretzels- evidence of a German monarch longing for home. There’s a word for these bonus pieces of text- marginalia.  As someone who regularly trawls through the archives, finding an inky, blotchy scribble in the side-lines is always exciting. They point out errors, bring a little context, or just add a welcome human distraction in the endless pages of accounts and bureaucracy I'm often reading.

The skill of fishing chalk-streams is really the ability to skirt your fly close to the reeds, under trees and in the edges. It’s an exercise in reading marginalia, for in these snug spots lie the biggest and most wily of trout. Some fishermen are numbers men, happy to drag nymphs in the main current through shoals of grayling or torture baby trout that rise for anything. Personally, I’d rather endure more Jane Austen; it’s a bore unhooking grayling and they make my hands smell. So, unless it’s a specimen size, these days catching a grayling is a disappointment. I’m not after pewter; I’m chasing gold. So clear troughs of gravel are best ignored.

I’ve had some good trout this season. In April, when it can be a bit cold and dire my father and I spotted a snug spot, where tree roots had made a pretty ring, almost like bathing pool. Although nothing had risen and the river had not yet cleared enough to see through, I plopped a nymph to its edge and winkled out a tubby trout. It was particularly pleasing as I'd tied  it myself to my own experimental design using lots of peacock, green dubbing, and copper.

In early June I had a fantastic and rare, free afternoon following a successful bid at Christies for work. I hopped into my car changed out of a suit and into scruffy stuff in a motorway service station. After a slow afternoon, I was treated to a spate of mayfly. I watched a steady riser on the edge of a flowering flowing stretch of reed. I wanted to speed towards it, but that never works, so I had an agonising slow walk, casting and catching irrelevant small fish along the way. I arrived in casting range, steeled myself, cast and caught the reeds then cast and caught the reeds again. Luckily they were so thick, nothing was disturbed, but I was taking a chance. On the third cast, when by some godly grace my fly landed well and could trace the line of weed, I got her; a plump and pretty fish worth waiting for: mission accomplished. 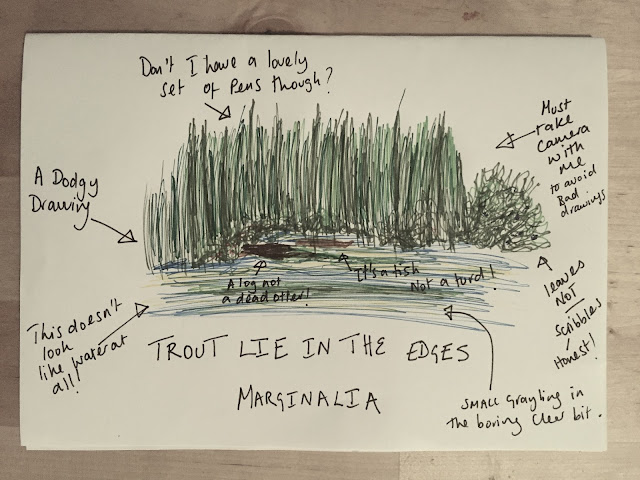 With time to spare, I took three steps forward and saw a lovely, dark inlet. Again, I willed my fly to kiss the reeds because the spot looked likely. It was. I don’t often boast or brag but this was a good three-pound cock fish, it was also really, bloody, ugly. It had a kype and a generally rather bruised and dark appearance.  Still, this “outsider” of a trout serves as an extreme example of the rewards of fishing on the edges. A wise fisherman told me once, “that if I haven’t lost at least three flies, I’m not trying hard enough”. That can only be because he knows the wisest thing to do is to ignore the mainstream and hunt in the margins.
at Monday, July 13, 2015