I spent a large portion of the night before tying flies for the next day. The one's I made are all variations of things made with hare's ear. With these and the dregs of last year's flies I was able to put something together that was vaguely respectable. 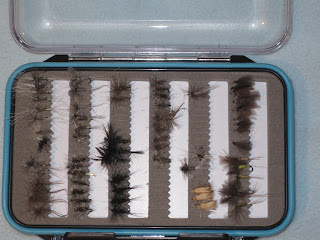 The drive over from Hay to the Monnow is as beautiful a drive as you could possibly want. I got proper butterflies in my stomach I ate an apple to quench  my thirst. I regretted forgetting my water bottle for the rest of the day.
Meeting Mr Chips was brilliant. I made an instant townie faux pax by trying to pronounce the Welsh-spelt village phonetically. "le-lang-goo-wa".
The Monnow, for a chalk girl like me, feels as if it is cut out of  rock. The flow feels as if it is a gush of blood from a knife dragged down the the arm of the mountain. There is something raw about the place but it doesn't frighten me. Think beef carpaccio rather than steak tartare.
I fished a duo over some inviting ripples and I hooked onto a fish on the third cast. I say the third cast but the other two were so rubbish that it should have been the first.
Unfortunately, I had forgotten how to play a fish and promptly lost it.
We spent the rest of the morning hunting rises. We spotted a huge fish from on high. It sat ominously in a new V-shaped ripple making thingy that had been made just the last week by the club. Dave explained the good work they all do on the Monnow and I felt privileged  and humbled to be fishing on this much loved water.
I goaded Mr Chips to show me how it was done and he managed and with some panache.  As the wind came up and the grannom hatch disappeared for lunch we decided to join them. 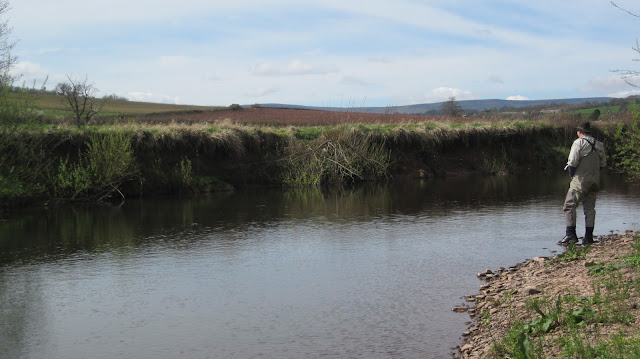 Pork pie, champagne and tomatoes, a giggle or two and some insightful musing made for an ideal fishermen's repast.
We moved to a more sensibly named stretch of river. I half listened to Mr chips as he told some  story about the bridge which is apparently a little bit historic.  I apologise for not really paying attention but there were rising fish about.
Anyway we set down to catch them. Thankfully, I got one and I cooed over it in a distinctly girlish manner. Then Dave got another. Four wader-wearing figures came over the bridge. I was goaded into casting for my second. Then, just as soon as the audience assembled, I moved my kneeling knee slightly to the right to find nothing there, so I tumbled in.
I watched this assembled Monnow mafia flick lines expertly over this gentle gushing stretch of the river. They were in a different league to this damp flyfisherlady.
I was very glad when the word pub was mentioned some few minutes later. I sat there, cold, damp and bedraggled. I listened to their funny Monnow ways, in their funny Monnow language of raspberries, socials and brogues. I decided that it was a language I want to know a little bit better, so I decided that I ought to return Monnowards soon.
Fishing Trips V.iii  Monnow and Miss 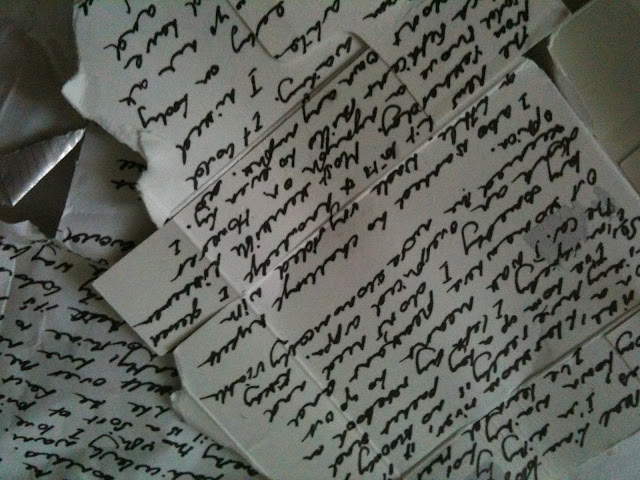 So as my real time blogging experiment continues, I'm sitting on the Monnow waiting for something to rise. I learned yesterday that on a flat stone river that "if it ain't rising there ain't no bloody point". So I've torn up a fag packet whilst regretting leaving my notebook in the car. I was meant to go out somewhere pleasant and buy something I don't need and drink an over priced cuppa somewhere quaint. Fishing seemed the more economically viable option. I also wanted to challenge myself a little. Wade unaided with the new little bits of knowledge I gleaned from yesterday. Most sensible fishermen would throw an nymph on. However, I lack sufficient skills to even try. I also don't really own any nymphs.
So here I am waiting. It could be a while. I missed hooking into a rise early on today. Which annoys me as I think it would have made Mr Chips and the other masters proud had I managed it somehow.
I'm now using the foil of the packet. I'm rapidly coming to the conclusion that I must be bonkers. It's not even particularly warm. It is very pretty though. I love the fact that the soil is a s sort of primeval rusty red. I like the fact that it speckles itself over the flat stones. Apparently true Monnow trout have a red outline to their fins. I wonder if it's to reflect the red soily colour. Anyway, fishing in this way feels very natural.  That I should catch anything would be a deserving gift.
You can't see the trout very often. A rise is all that will reveal itself.
As a child of the chalk I find this disconcerting. I'm used to manipulating a spotted fish to rise, plugging at it with my assortment of flies until it relents.  Here, you just can't fight nature. You have to go with the flow. I'm going to have a little nap. 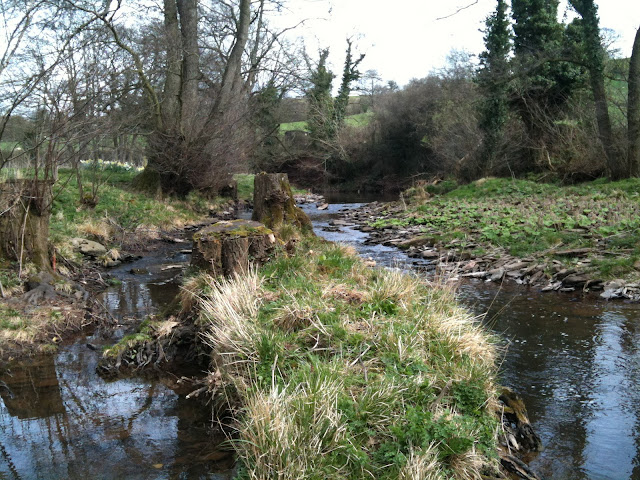