The weather has been rather miserable in Yorkshire recently and I have been thinking of sunnier times. 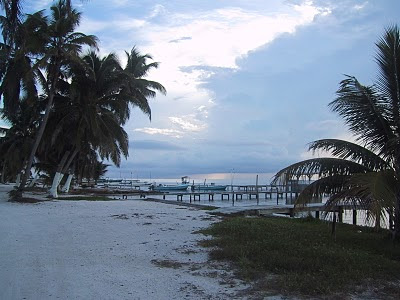 A few years back I went to Belize as part of a tour to Mexico. The trip was ostensibly to look at Mayan ruins. However, most of the trip was spent exploring the wilds and jungles of the Yucatan. By the time we had reached Belize, I had swum in ice cold underground rivers, seen shit throwing spider monkeys and tasted the most glorious toffee-like Guatemalan coffee whilst playing scrabble in a tree house. I had one overwhelming worry. I hadn’t done enough fishing. My highly giggle-making boat trip, where I had braved tampons and rednecks gave me a taste for salt-water fly fishing.
We arrived on Caye Caulker with our backpacks and our smelly selves assembled on golf buggies. I looked out onto the bright blue shallow seas and thought of fish. I looked out towards the town and spotted something fabulous- a man with a fly rod. I’m not sure if this is true, but I am sure I leapt off the golf buggy and started chasing him. I caught up with him, nearly splicing my flip-flopped feet in the process.

Now, Caye Caulker is part of a string of limestone islands and atolls on the Belizean barrier reef. Despite being in central America, the official language is English, the Queen is on the banknotes and the population consists largely of the Rastafarian descendents of slaves brought over by the English to cut Mahoghany. The rest of the population is Amish, but that’s another story. The whole island is rather like an advert for Lilt, it has a totally tropical taste.
We arrived at the hotel and my search for Eloy began. You have to imagine the native dialogue in a Caribbean accent. When I try to mimic it, I sound Welsh. I asked at the hotel reception.

I walked towards the town. The houses are wooden affairs on stilts painted bright colours. Coconuts and fishing nets litter the streets. Chickens squawk and run about. 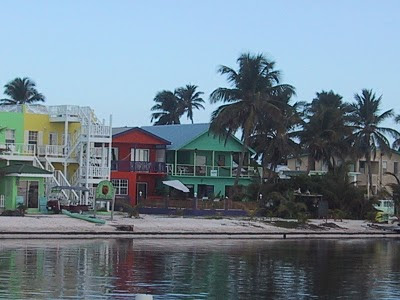 “I’m looking for Eloy”
“Eloy, the fisherman?”
“Yes”. I was getting a little exasperated, I had been walking through a very small town a rather long time
“You wanna catch bonies?”
“I’d like to go fly fishing yes”
“Follow me”

I followed the man down the only back alley in town. I was worried and clutched onto my travellers cheques and passports tightly. He knocked on a door marked Eloy’s Fishing Experiences. No one was in. I was a bit despondent. My raised hopes dashed and I had got rather bored of this Caribbean Kafka. Suddenly the man squawked like one of the shit-hrowing spider monkeys I had seen before.

“Baby girl, I’m Eloy. You’ve asked nearly every man in this town! Everywhere I went they was saying there’s some English girl wanting to go fly-fishing” He squawked again, “You should see your face!”

I laughed hysterically with him. “So bonies on the fly, this I gotta see, I’ll take you the day after tomorrow, see me here at 5am”.

I was overjoyed and walked back looking out onto the flats. The next day I snorkelled with sharks and manatees, fishing tomorrow would be rather different from an English chalkstream. 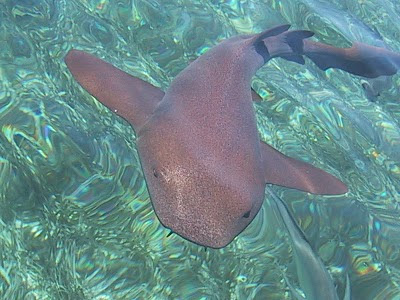