The watery blanket of the river was being gently punctured by rises. I knew I would catch fish.  I remembered my father explaining to me as a very young girl about something called smutting.  Here trout sip the tiniest of newborn flies from the surface as they try and break free of the film to fly away and live.  I walked down the river and saw three rising fish. I tied on a size 22 poly-winged spinner.  Within three casts I caught a fish.  I worried for a second that my evening had peaked too soon.  I was wrong. 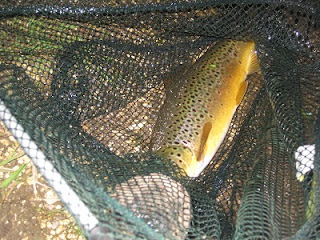 Buerre Noisette
The air pinked as the sun began to set and I walked upstream.  The light was fading so I removed my Polaroids. I heard a rise and spotted a moving bar the colour of beurre noisette (that's burnt butter to the less culinary minded). This was the fish that would make the horrid, trafficsome journey worth it.  I cast a fly over him.  I changed my fly three times and he remained uninterested.  Charles Ritz's stern, hotelier's words burned in my ears, "It's all in the presentation!" I changed my leader to a thin 2lb line, and tied on a minuscule Cul de Canard emerger.  With a praying sigh I cast, paying special attention to my timing.  I watched and waited and felt. I got him.
Landing that fin perfect fish would have been special enough for one evening. However, I was surrounded by bright, navy flashes of rushing swallows. I saw a young hare, a pair of water voles, an eel and maybe, just maybe a pygmy shrew ran over my welly. A perfect, calm marvel of an evening.
Although being alone of the river gives me time for introspection, I wonder sometimes that it might be better to have someone to experience these things with me. It seems selfish to have such beautiful hours all to yourself. The boy I was seeing decided that seeing me was not such a good idea. I am inclined to agree with him and I've taken it on the chin. It does show most harshly that I am not quite up there with Odette yet. I certainly do not possess enough charm yet to captivate Winston Churchill or a bespectacled boy, but certainly more than Lady Astor.
As I walked back on the riverbank, I met three gentleman. The youngest was about seventy five.  They wonderfully referred to themselves as "The Last of the Summer Wine Fishing Club". They had such camaraderie and had the kind of easy banter that only firm friends can. I felt envious and oddly, the sudden appearance of others confirmed my aloneness. They insisted on opening gates for me, even though it would have been far easier (and quicker) for me to extend them that courtesy. It struck me though, that they were of an age of the Odettes, Parkers and Mitfords, of Wrens, widows and Munition workers. Women who deserved enough respect to have a gate opened for them, and a seat given to them on a bus. I'm working on it. 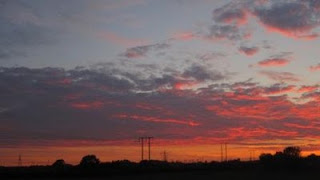 Sunset
My last minute, desperate and yet sucessful fishing trip has gone someway to emulate Madame Pol Roger.  In this though, and at the moment I can say like her that my great loves are "to garden, to go trout fishing and to decorate my houses".
at Wednesday, June 23, 2010